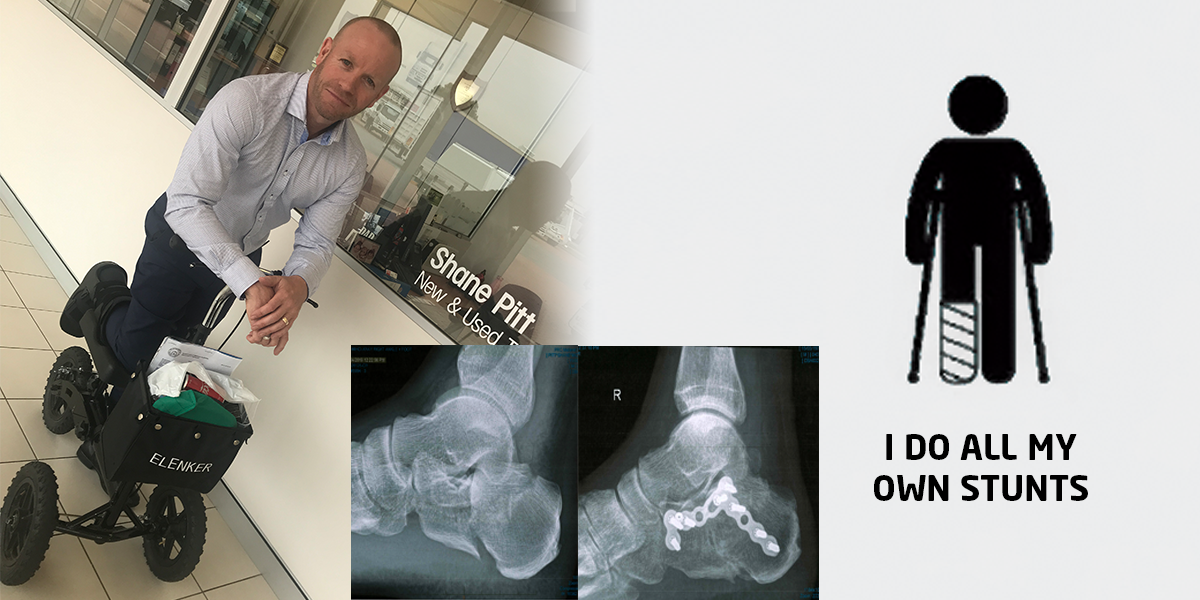 What do a fence, a pair of thongs and no beers have in common? Well if you ask Shane Pitt he'll tell you they're the perfect ingredients for a broken ankle.

But we should rewind a little and set the scene. It was a gorgeous April day and Shane was standing on top of a fence in his favourite pluggers thinking, "that drop doesn't look that far". Inevitably they would be his famous last words (or thoughts in this case).

What followed was a very long drop, a very loud noise and a whole lot of words that probably can't be repeated here. After a visit to the doc, a lengthy surgery and a stay in a hospital bed, poor ol' Shane left with no less than 8 pins in a plate attached directly to his ankle. Turns out his ankle hadn't just broken it had basically shattered and had ended up in no less than FIVE pieces!

So as a truck sales consultant how do you keep yourself in operation around a motor vehicle yard after you’ve broken your ankle? With a scooter of course! He may look a little odd as he zooms his way around the Forrestfield sales yard and offices but to give him his due he has not allowed the shattered bone to slow him down.

The scooter provides accessibility to everywhere he needs to go while not putting any pressure on the ankle. His biggest issue he says is, "it's on my go fast foot" (the one he uses to operate the accelerator in a car). Which means at least until Christmas (when his doctor says he might be able to be pain-free) the only thing Shane will be driving is his scooter.

But at least he's able to keep a positive outlook about the whole thing, he says he's entertaining the idea of jazzing up the scooter and that "future upgrades might include rims and a wing".