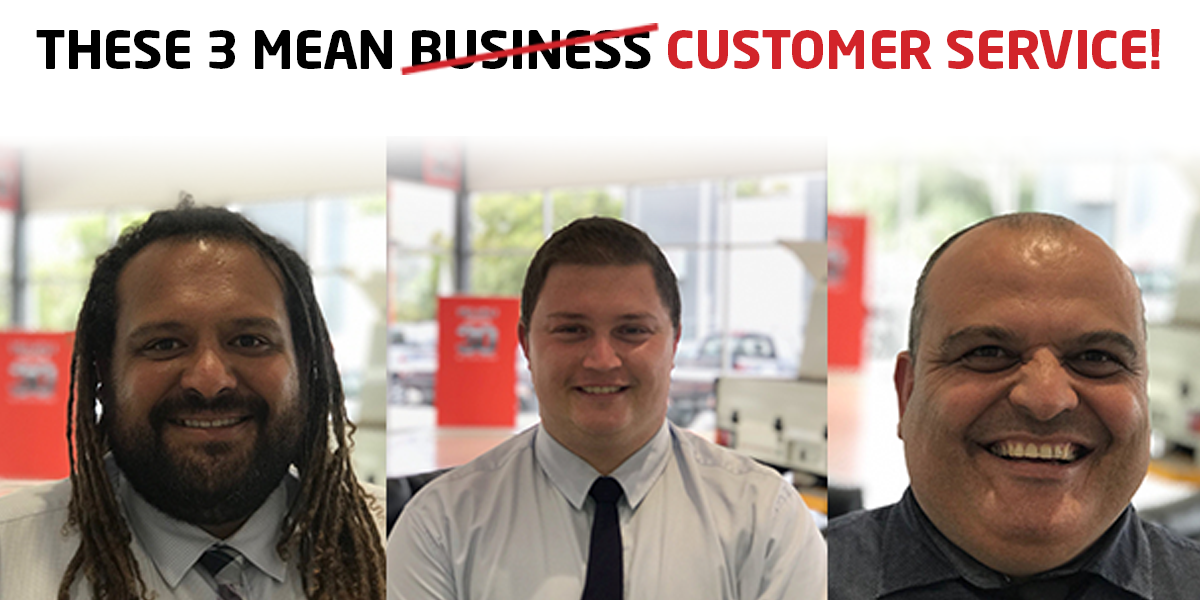 If you have bought a D-Max or MU-X in recent times from Major Motors Bibra Lake, there’s a good chance you may have met several, if not all of our energetic sales trio, Grant Hall, Aaron Nyboer and Oky Ramos.
Extremely enthusiastic and with good sales ethics is the best way to describe these three as they have the common sense to know full well that their futures hang on giving the best in customer service that they can.

Grant Hall, a natural extrovert, has been with Major Motors Bibra Lake for the past three years after joining in the footsteps of his twin sister.
Prior to joining the sales team, he worked with a major utility provider for six years so entering the field of sales was a complete change.
‘I’m one those guys who finds it easy to talk, so talking for a living is reasonably easy for me,’ he said.

‘I reckon I’d find it boring selling sedans as they’re not nearly as interesting as what we sell and the great thing about what we handle  is that our clients range from tradies to farmers to people working in really outback areas,  to other people who simply want a ute or off road vehicle in their life so they can do new things.

‘It’s good being a part of all that’, he said. ‘The various versions of the D-Max and MU-X are first class, value for money vehicles so presenting them to our clients is easy. I for one – and I know I speak for the others, would never want to sell something that wasn’t going to live up to our promises’.

Aaron Nyboer at just 22 years of age says he stumbled into motor vehicle sales, initially with a small car dealership in 2016 and says that in the two years he has been with Major Motors, he has really enjoyed it.
‘It is interesting – customer requirements in utes are rarely the same. They have different uses for them and it is always an interesting learning curve to discover what the ute’s role is going to be for them’, he said.

Aaron says that one of the most interesting sales was with a client who spent $40,000 on extras to make it the largest ‘build project’ that the Bibra Lake branch has had.
The client added a special custom-built tray with lift off canopy, lockers, spare wheel carriers, extra lights and more – all to his taste and personal use.

‘We have always considered the D-Max to be really well fitted until this customer came along,’ he said with a laugh.
Aaron is the proud father of two children with partner, Shelby. The couple met in their very young days at High School to be child-hood sweethearts who have stuck with the childhood dream of building a life together.

The newcomer to the team is Oky Ramos who has been with Major Motors for just four months.
The field of sales, is however, far from being a new venture as Oky has worked in real estate, audio visual and in fabrication sales and loves it.

‘We have a great product at a good price and I’m really pleased to be in good company with my belief that the act of buying something as significant as a new vehicle should be a pleasurable experience for the customer’.

Oky describes his first four months as being challenging, interesting and rewarding. ‘Overall, the experience has been great, though there has been a fair bit to learn,’ he said ‘Because I’m new to the job my focus is on what we term the retail side of things – that’s handling the sales to families wanting an MU-X and tradespeople buying D-MAXs rather than handling corporate sales.

‘I must say though, it is interesting. I’ve sold vehicles to people ranging in localities from Kingsley to Bunbury and the mix of people adds to it greatly. Oky has been married for 23 years and has two sons.